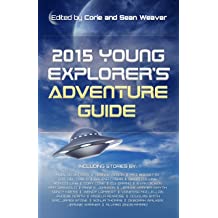 24 science fiction short stories for the middle grade reader from Hugo and Nebula winning authors as well as newer writers.

It’s time for a bigger universe.

Sally Ride, first American woman in space and Presidential Medal of Freedom recipient, famously said: “Young girls need to see role models in whatever careers they may choose, just so they can picture themselves doing those jobs someday. You can’t be what you can’t see.”

“When I was a child, the school library had a Girls’ Section, which included fairy tales, and a Boys’ Section, which included all the science fiction. Things have changed, of course, but not enough. There is a strong need for science fiction, as opposed to fantasy, aimed at girls, especially in the middle grades. This anthology is an important contribution to the effort to fill that need, and I’m delighted to be a part of it.”

Authors in the anthology are:

Design and Social Media Marketing by: